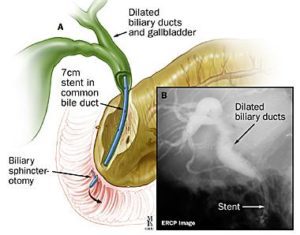 What is ERCP? Let’s take a good hard look at this procedure called ERCP that boasts a complication rate of between 5% and 15% depending upon who you get your research information from [1,2].

If you have had or are having an acute pancreatitis episode due to suspected gallstones (seen or unseen on scans) your attending physician maybe suggesting or telling you to have an ERCP. What exactly is ERCP?

ERCP = Endoscopic Retrograde Cholangiopancreatography and it is used for diagnosing and supposedly relieving problems of the digestive tract.

This is a short post because information regarding what ERCP is, how it’s used and what you can expect have already been covered here and in the included videos.

In 1979 I had an early form of ERCP but it wasn’t called ERCP. My doctor simply called it endoscopy. I came through it without a hitch but depending upon the experience of your physcian who actually does the ERCP you may or may not wish you had never agreed to it because …

6% – 10% of patients experience serious complications and one of those complications is acute pancreatitis. That is as high as 1 in 10 who undergo the proceedure realize it was a mistake. Of course that also means that 90 – 94% realize no problems due to ERCP.

Personally, knowing what I now know, I’d have to be at deaths door before I allowed the procedure but that’s me. And then I’d want to know how many of the proceedures my physician doing the ERCP has actually done, how many he or she does each month and how many of his/her patients experienced complications.

I’d want to know the physician knew what he or she was doing and had had plenty of sleep, didn’t have a fight with his/her spouse or some other major distraction that may cause him or her to screw up during my proceedure. An average of 1 in 10 having serious complications from ERCP is a tad high as far as I’m concerned. But …

DO NOT let my thinking influence your decision as to whether or not you have an ERCP. You are you and I am me, we need to do what we feel is best for us at the time. Just do your research and go in with your eyes wide open and realize that ERCP carries a fairly high risk of complications.

Have you had an ERCP procedure and if so what was your experience?