Before I was diagnosed with pancreatitis I remember a really fun day in Doctor Langdon’s Clinic, at least I think it was there I had an upper GI and lower GI. That was like my third upper GI and only lower GI, anyway …

I think the lower GI was what they did before they developed the colonoscopy. They knock you out for a colonoscopy but they didn’t for a lower GI. I was wide awake for the whole 9 yards. But first let’s talk …

Ok since I had both the upper and lower Gi they did the upper Gi first but I had to prep for both so that meant fast and blasting. If I recall correctly (it was a long time ago) I had to fast for like 24 hours, take laxatives and then powerwash my intestinal tract with a hose (enema bag). The old fast n blast. Then I had to drink a gallon of this chalky crap called barium when I arrived at the clinic.

Once I got that down they escorted me to some room filled with equiptment, had me lie on a table and started taking pictures of my upper torso (upper most intestines, stomach, esphogus) while I squirmed into different positions as instructed. Except for drinking that nasty chalk shake it was’t to bad. This wasn’t an upper endoscopy like they do now so I didn’t have a tube stuffed down my throat, yet. Dr. Langdon did an actual upper endoscopy later. Right after the upper GI was completed they took to another room for the … 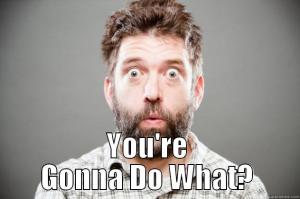 Now like I said earlier the lower GI test wasn’t the same as a colonoscopy and at that time they didn’t send you to dreamland with drugs. So …

Once I was in the room I was asked to get on another table. They mentioned something about prepping my lower intestines with barium. Then …

Someone spread my butt cheeks and jammed a tube up my ass. Then they began to blast that liquid up into my lower intestines. After a couple minutes of flow from their hose I felt like a bloated whale about to explode and the nurse said I had to hold it in! Then they pumped up what felt like a huge butt plug in my fart box and started taking pictures of my intestines. There I am so full of barium I felt like exploding and they said turn to your left? Then turn to your right. Now lay face down. Now roll over onto your back. I felt like a pregnant dog doing tricks! And what was found?

Nothing! But that’s a good thing because that meant I didn’t have an obstruction or cancer that they could see clearly. How they could see clearly with all that barium packed into my intestinal tract is a whole different story that I believe is taught in medical school in the radiology department.

10 thoughts on “The Upper GI and Lower GI Was Fun”