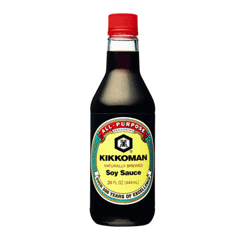 As is true of many foods soy sauce is not good for those who suffer with chronic pancreatitis.

Why not you ask?

Soy sauce is made by fermenting wheat or another grain such as rice. Grain alcohol, ethanol, is made from fermented grains.

There are different types of this sauce and it seems like asian countries have their own formulas.

I didn’t know how soy sauces were made or that the sauces contained alcohol!

I found out from a lady who suffers from CP and couldn’t figure out what was making her sick. She had healed up nicely via diet and supplements and then became ill again. She discovered that soy sauce contains alcohol! However …

Most of you who have read my blogs know that alcohol is a real “no-no” when you have pancreatitis.

Alcohol and fat are the two big enemies that cause problems for a damaged and or inflamed pancreas.

Unfortunately you may have to eliminate soy sauce from your diet unless you find an “alcohol free” version. You may also want to research other similar asian type sauces before you find yourself becoming ill for no apparent reason.

7 thoughts on “Soy Sauce: Does Your Soy Sauce Contain Alcohol?”